Posted at 14:47h in Company, Payroll, Timekeeping by payrollcentric 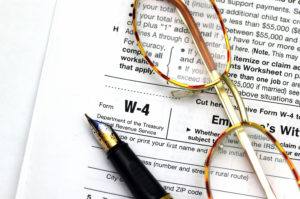 The tax and payroll communities are buzzing with news that the IRS is planning to overhaul Form W-4, Employee Withholding Allowance Certificate. This will be the first major change to the W-4 in a very long time. The anticipated update is a result of the grand sweeping changes to the tax code that were made pursuant to the Tax and Jobs Cuts Act passed in 2017 (“TJCA”). For example, employees currently compute their employee tax withholding on the basis of allowances for exemptions. However, exemption deductions have been eliminated in the TJCA. Numerous publications have attempted to predict what the new W-4 will contain but the IRS has not released the details.

The IRS originally intended to release the new Form W-4 for 2019. However, the IRS delayed its plans to release an enhanced Form W-4 for 2019 as a result of the feedback (read: pushback) that the IRS received from the tax and payroll communities. On March 7, 2019, Scott Mezistrano, an IRS official, announced the schedule for the rollout of the anticipated new Form W-4. The rollout will begin with an initial draft to be released on May 31. The draft will be open for comment by taxpayers. However, Mr. Mezistrano did not reveal specifics about how the form will be drafted.

The IRS may have offered some clues regarding the new W-4 form through its recommendations on its website irs.gov. The IRS currently recommends that for now, before the new form is released, taxpayers do a “paycheck checkup” using the IRS’ withholding calculator to assist with bringing their withholdings more accurately in line with their income tax due. Others have surmised that the new W-4 will be crafted to look like a mini Form 1040, federal income tax return, to ensure that taxpayers’ withholding more accurately reflects their federal income tax liability.

Despite all the buzz about the anticipated Form W4, we will have to wait until the initial draft Form W-4 drops on May 31 to learn more and determine how the new Form W-4 will impact tax withholding obligations.